As a pilot project, in order to enhance knowledge transfer at the University of Vienna, I have spend some time during the spring 2017 working with artist and illustrator, Solmaz Farhang, on communicating my research on social robotics to non-experts. Below is the result of our work showing four different fictional ethnographic field observations taking place in the near future.

We spent the first couple of meetings discussing the research topic of social robotics and the illustrative possibilities considering the specific sociological perspective situated within the interpretive research tradition. Aiming to ensure that the illustration would capture aspects of social robotics research in an original and interesting way, we discussed together how to best bring the general public into the daily practice of a sociologist. After trying out some different ideas we decided on a conceptual level to shift from a third-person perspective of what the researchers do to a first-person perspective – presenting a sociologist in action. Accompanying this illustration was also an audio file with the fictional field-notes of the sociologist aiming to illustrate the data collection process of an ethnographer during fieldwork, which was recorded with the help of Daniel Meaner. Inspired by some recent technological developments we decided to try out the format of 360 degree illustration, which allowed the general public to actively explore the illustration thereby creating an immersive experience for the spectators. Retrospectively, the collaboration and work process was truly the outcome of mutual respect for each other’s competences and ideas, which enabled a free and creative space, in which we could together bring about something none of us had predicted in advance. We think the resulting work proved to be an innovative representation of sociological research into social robotics accessible to the general public, which can be used to facilitate public discussion on the many questions that need to be asked and addressed in a robot-supported society.

WHEN AN INTERFACE BECOMES THE FACE

Every semester the University of Vienna is posing a questions, which they invite people to reflect upon and engage in a debate while try to answer it too. For this winter semester of 2016 the questions have been "how we are going to live in a digital future". As an employee I have contributed to the discussion by writing a short blog post. I had a lot of fun preparing this blog post not only because I could present some of my work and reflections on social robotics but also because I got the change to present it to the general public. The exercise is to communicate the research I do in a understandable manner and in a way that is interesting to those who might not be so familiar with the topic.

Today most of us have integrated all sorts of digital devices as part of our lives so far that it is hard to imagine life without smartphones, tablets and computers. All aspect of our lives have been transformed by their use, from entertainment, through work and socializing, even to love. As media they significantly shape our reality, but when it comes to social relationships they remain just that – tools that help us connect to others. But could we imagine a future in which we do not use digital tools but rather interact with them as with independent beings? Where we do not use the computer to socialize with friends, but socialize with the computer? In such future interfaces would become faces. This future is already becoming a reality and it is best seen in recent developments in social robotics. While social media help mediate already existing relationships, robots may soon become beings with whom we will develop completely new kinds of relationships, eventually changing the landscape of social reality.

​MY RESEARCH IN ONE PICTURE

During the spring 2017 I participated in the photo competition “My Research in one Picture” organized by the University of Vienna. The competition aimed to help early stage researchers communicate their research to a general audience and to become more visible. My photo was selected by the committee to continue to the second round in which a facebook vote placed it among top 10 (unfortunately my photo did not win any prize). With my picture "Betwixt & Between" I tried to illustrate my work on social robotics from the perspective of sociology. 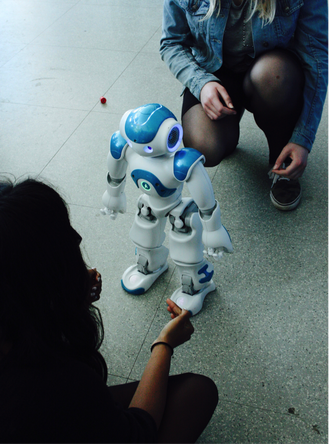 For the semesterfrage "health from the laboratory - what is possible" organized by the University of Vienna I gave some examples of how robots are currently developed and used to improve the health of people and how the work in laboratories of robot engineers is going to play a significant role in the healthcare of tomorrow. ​

Robotics might not be the first thing that comes to mind when we ponder upon the semester question: “health from the laboratory – what is possible?”. First of all, when we look at society today it might seem like it is still far from being invaded by robots as it is so often showed in various pop-cultural narratives of big Hollywood productions, like Blade Runner (1982), The Matrix (1999) or I, Robot (2004). But perhaps we are simply not looking at the right places. Healthcare is in fact one of the areas where research and technological innovation have been looking towards robotics as a promising solution to the various challenges posed by serious illnesses and accidents, demographical changes, and lifestyle problems. Judging by recent developments, the use and growing potential of robotics in medicine and for therapeutic purposes is something that has the potential to radically transform current understanding of health, and as such has attracted attention of many philosophers and sociologists.